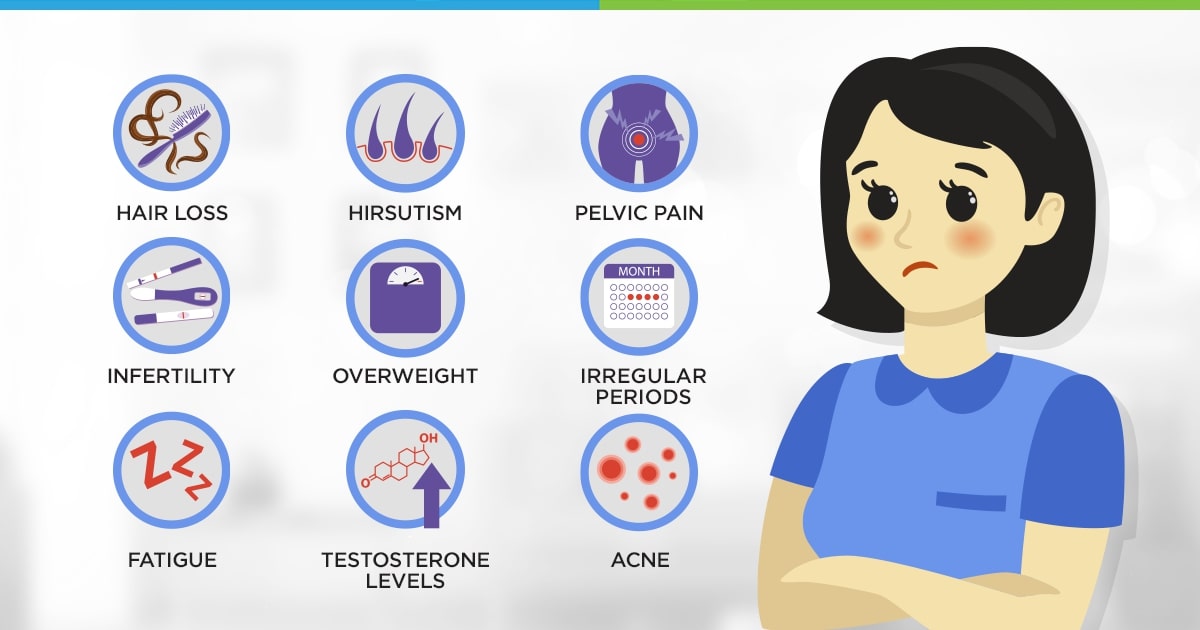 Polycystic Ovarian Syndrome (PCOS) is an endocrine disorder affecting approximately 1 in 10 women. Symptoms vary from woman to woman making a PCOS diagnosis difficult. Less than 50% of all women with PCOS are correctly diagnosed. According to a recent study, it can take more than two years to receive a diagnosis of PCOS.

Here is an excerpt from a video interview of Dr Madhavi A, Consultant Obstetrics & Gynaecology at Giggles by OMNI RK, Visakhapatnam on PCOS and measures that can be taken to keep it at bay.

A. Polycystic Ovary Syndrome is a complex condition that affects how your ovaries work. Although the exact cause is unknown, PCOS is related to abnormal hormone levels including resistance to insulin and raised levels of testosterone. It often runs in families and you will usually start to notice symptoms in your late teens or early twenties.

Q. What are the symptoms of PCOS?

A. Symptoms can include irregular or absent periods caused by an imbalance of hormones, difficulty in getting pregnant, excess facial and body hair, weight gain, thinning hair on your head and oily skin and acne.

Not everyone with PCOS will have all of the symptoms and they can vary in severity from person to person so if you think you may have the syndrome, the first port of call should be your General Physician who can help you get a diagnosis.

Q. What are the ways in which PCOS can be diagnosed?

A. PCOS can be diagnosed using one of the following symptoms,
Excessive body hair
Irregular or scanty periods

Q. What are the causes of PCOS?

A. We don’t have a definitive cause for PCOS. Research says it is purely a lifestyle disorder, but genetics and environmental factors may also play a role sometimes. Although PCOS is not completely restricted to obese women, there is an entity called lean PCOS that is seen in lean women with a poor lifestyle. Obesity doesn’t cause PCOS but makes it worse because of insulin resistance which leads to diabetes, with high levels of insulin—a hormone made by your pancreas.

Q. What is the prevalence of PCOS?

A. The prevalence of PCOS is on the rise today. It accounts for about 5-10% of the overall women’s population and 20-25% of the reproductive women’s age group.

1 in 10 women today suffer from PCOS.

Q. What are some changes one can make to avoid PCOS while planning for pregnancy?

You can increase your chances of getting pregnant by:

If you have made some changes and that still hasn’t helped, your doctor might order fertility tests and prescribe fertility medications to help you ovulate.

Q. Is there a specific age group for PCOS to occur?

A. There is no specific age group for PCOS, although women in a reproductive phase of their lives are prone to contract PCOS more.

Q. What defect does PCOS have on fertility?

A. Women with PCOS can struggle to become pregnant due to fluctuating hormonal changes in the body and are at higher risk of developing complications during pregnancy.

However, by managing the symptoms and leading a healthy lifestyle, many women with PCOS can become pregnant and have a healthy baby.

Q. What are the short term and long term effects of PCOS?

A. The short term and long term effects of PCOS are:

Q. What is Sleep Apnea and its link to PCOS?

A. PCOS has been strongly linked to sleep apnea. Sleep apnea is a sleep disorder characterized by brief episodes of stopped breathing during sleep. This disrupts sleep and impacts oxygen delivery to the body. Sleep apnea can lead to lower pain tolerance, high blood pressure, mood changes, heart disease, and increased weight. Signs of sleep apnea may also include:

Q. Does PCOS cause cancer?

A. Polycystic ovary syndrome (PCOS) is extremely prevalent and probably constitutes the most frequently encountered endocrinopathy in women of reproductive age.

Q. What are the cardiovascular risks involved with PCOS?

A. A spectrum of abnormal lipid and lipoprotein profiles may be found in patients with PCOS, as has been recognized for some time. Characteristically, patients have elevated cholesterol, triglycerides, and LDL cholesterol and have lowered high density lipoprotein and Apo A1 levels. These findings, however, are highly variable and depend on the obesity status, diet and ethnicity of the patient. While hyperandrogenism is likely to play some role in these abnormalities, hyperinsulinemia (insulin resistance) appears to be the most important contribution to these abnormalities, particularly the elevation in triglycerides. These abnormalities are known to be highly predictive of cardiovascular disease.

Hypertension is extremely prevalent, particularly in older women with PCOS and those who are obese. Again insulin resistance is highly correlated with this abnormality.

Q. Why is the quality of life reduced in PCOS?

A. Polycystic ovarian syndrome (PCOS) is one of the most common endocrine disorders that may be effective in reducing the quality of life.

Q. What is the solution to PCOS?

A. Although there are specific medications to take care of PCOS, however, some changes in diet along with an active lifestyle can bring back normalcy in the way ovaries function and control these fluid-filled cysts.

To help decrease the effects of PCOS, try to:

– Maintain a healthy weight. Weight loss can reduce insulin and androgen levels and may restore ovulation. Ask your doctor about a weight-control program, and meet regularly with a dietitian for help in reaching weight-loss goals.

– Be active. Exercise helps lower blood sugar levels. If you have PCOS, increasing your daily activity and participating in a regular exercise program may treat or even prevent insulin resistance and help you keep your weight under control and avoid developing diabetes.

Q. Can birth control pills be used to treat PCOS?

A. Many women with PCOS take hormonal birth control to help manage the symptoms caused by the condition. For example, PCOS can cause you to miss your period for months at a time. Birth control can help regulate your menstrual cycle.

Other symptoms that birth control can help manage include:

Q. What can one do to control excessive hair growth while suffering from PCOS?

A. Excessive facial and body hair (hirsutism) is one of the more distressing and visible symptoms of polycystic ovary syndrome (PCOS), impacting 70% to 80% of women with PCOS.

– Shaving is the most obvious choice to remove hair, especially of the face. It cuts the hair right at the skin’s surface, leaving a blunt edge. And, despite what some people may tell you, it doesn’t actually cause the hair to darken or thicken.

– Waxing involves the application of a thin layer of heated wax to the surface of hairy skin. Unlike shaving, waxing only needs to be done every three weeks or so. While effective, waxing can cause short-term redness and swelling.

– During electrolysis, a small needle is inserted into a follicle to deliver an electrical charge, killing the hair down to its root.

– During laser hair removal, a trained dermatologist will apply an intense beam of laser light to an area of hairy skin.

Q. What is the effect of PCOS on diabetes?

A. Polycystic ovary syndrome (PCOS) is a common endocrine disorder, affecting women in reproductive age, characterized by chronic anovulation and hyperandrogenism. several studies have suggested that insulin resistance plays an important role in the pathogenesis of the syndrome. As a consequence of insulin-resistance, women affected by PCOS often present abnormalities of glucose metabolism and lipid profile, and have an increased risk of type 2 diabetes and cardiovascular disease over-time.

Q. What is meant by lifestyle modification while suffering from PCOS?

A. Lifestyle modification consists of a multifaceted approach of dietary, exercise and behaviour therapies, which aim to educate an individual’s principles and techniques to achieve dietary and exercise goals.

Weight loss is thus a desirable outcome in overweight women with PCOS for treating both acute clinical and long-term metabolic health. Successful weight loss strategies can be implemented into longer-term weight maintenance regimes through use of lifestyle modification techniques.

Q. What happens if PCOS is left untreated?

A. Women who are diagnosed with PCOS are prone to some long-term health risks that are associated with the condition.

PCOS is an independent risk factor for type 2 diabetes in middle age.

Women diagnosed with PCOS (or their partners) should be asked about snoring and daytime fatigue/somnolence and informed of the possible risk of sleep apnea. They should be offered investigation and treatment when necessary.

Women who have PCOS may have higher cardiovascular risk, putting them at increased risk of developing accelerated atherosclerosis, resulting in MI.

Women with PCOS have a significantly higher risk of pregnancy complications compared with controls.

Oligomenorrhoea or amenorrhoea in women with PCOS may predispose to endometrial hyperplasia and later carcinoma.

Q. Is PCOS typical to only females?

A. PCOS can also happen in males. Symptoms in such male members are balding before the age of 30, excessive body hair, less sex drive and rapid weight loss/gain.

Q. What is considered to be an ideal diet during PCOS?

A. Processed and oily food needs to be avoided if you are suffering from PCOS. Switch over to unprocessed and whole foods as soon as you can. Food in its natural, unaltered form, especially with a lot of fibre in it, helps to lower the male hormones. Also, maintenance of a proper balance of proteins and carbohydrates in your daily intake of food is a must.

Tea and coffee are stimulants that have a drug-like effect on our body. And although they are harmless in moderate measure for others, they have quite a negative impact on women with PCOS and can further worsen their condition by reducing sleep which increases stress.

Q. What is the importance of exercise during PCOS?

A. Physical activity is a key component of any lifestyle modification or weight maintenance regime. It can facilitate weight control through direct energy expenditure.

Doing any sort of physical activity for at least 50 minutes daily helps you stay fit and healthy. A lot of toxins are released from your body while you are working out, cleansing your system in the process. It keeps you in good shape, de-stresses you and helps preserve the overall hormonal balance of your body. Exercise increases metabolism which increases the body’s ability to burn the food we eat.

Q. What are the steps one can take for infertility during PCOS?

If you have PCOS, you might struggle to get pregnant. This is because the high levels of male hormones prevent the release of an egg (ovulation). If you have made some changes and that still hasn’t helped, your doctor might order fertility tests and prescribe fertility medications to help you ovulate.

If medications don’t work, your doctor might suggest surgery to remove a tiny amount of tissue that produces excess male hormones in the ovaries. Another option is in vitro fertilisation (IVF), which offers the best chance of conception.

However, this can be expensive and is usually only considered when all other options have been unsuccessful. Fortunately, with lifestyle changes or infertility treatment, the majority of women with PCOS do become pregnant.

Q. How can one avoid passing PCOS to the next generation?

A. If the clinical severity of PCOS is controlled in the first generation, the passing of PCOS to the next generation can be avoided.

Book an appointment with Dr. A Vishnu Sri

Book an appointment with Dr M.Raja

Book an appointment with Dr Vara Prasad B. Gillela

Book an appointment with Dr Sesidhar

Book an appointment with DR. I. SATISH RAJU